Take three or four exposures of the same scene. Don’t change anything on the camera and keep the framing the same.

Preview the shots on the LCD screen. At first glance they look the same, but are they? Perhaps a leaf moved with the wind, the light changed subtly, or the framing changed almost imperceptibly to include one seemingly insignificant object and exclude another. Time flows, the moment of each frame is different, and, as the saying has it, ‘you can’t step into the same river twice’.

Now bring up the histogram on the preview screen. The histogram is a graphical representation of exposure – the camera’s sensitivity to light. As you page through the images you can see small variations in the histograms. Even though the pictures look the same, the histogram data shows that in a matter of seconds the world changes, and these subtle differences are recorded by the camera. If you refine the test conditions – shooting on a tripod to fix the framing, moving indoors and closing the curtains to exclude daylight – still the histogram changes. Probably some of the changes are within the camera mechanism itself; still, the camera is a sensitive enough instrument to record them.

Add the sequence to your learning log with the time info from your camera’s shooting data as your first images for Part One.

Shot with a Nikon D750 on Automatic Mode.

As instructed in this exercise, I set my camera to automatic and took 3 exposures of the same scene without changing anything on the camera. I didn’t use a tripod but attempted to keep the frame the same.

It was a breezy day so I already expected a change in the scene.

The first thing and most obvious thing I noted was the clothes in the foreground have moved in the wind, a bus appears in the distance in the 3rd frame and the clouds changed subtly the light level also changed after the first frame, due to the sheet blocking some light out in the first one.

I already had some knowledge of histograms, but I ensure I did a little research beforehand.

I found this diagram explains a histogram in simple terms. 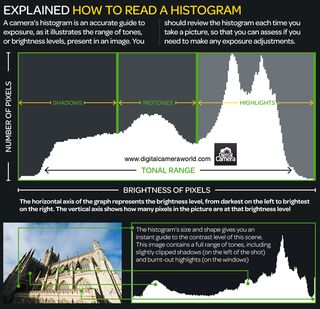 When I look at the histogram of my own shots for this exercise, I can immediately tell that the exposure is lacking in the highlights area and there are more pixels presented in the shadows and have been clipped (some detail in the picture may have been lost to this) and the picture is slightly underexposed in the foreground. The reason for this however would be down to the fact my focal point was targeted into the distance and therefore it would have made the camera expose the photo based on there being more light and less shadow. The landscape may have become burnt out and overexposed had I settled my focal point on the balcony railing for instance.

Although, not ideal, some detail would be recoverable from the shadows in post production. If the image had been overexposed detail would most likely be lost completely in any burnt out areas, so I am satisfied with the result I achieved with this exercise.