Start by doing your own research into some of the artists discussed above.

Then, using slow shutter speeds, the multiple exposure function, or another technique inspired by the examples above, try to record the trace of movement within the frame. You can be as experimental as you like. Add a selection of shots together with relevant shooting data and a description of your process (how you captured the shots) to your learning log.

Francesca Woodman, an American photographer, used long exposure times and movement to create blur in her images. Her pictures were shot in black and white with her pictures mostly featuring either herself or female models. Her work was heavily influenced by surrealism and conceptual art. Her life ended tragically by suicide when she was 22.

Woodman’s work only gained critical acclaim following her death, her work was viewed as extraordinary and she has been the influence of many photographers in the time since.

Her work seems to be shrouded by her suicide. I believe people try to psychoanalyse her work due to this, but I wonder if it would carry the same feeling and weight, were she still alive? Whilst I feel there is a darkness behind a lot of her images, her photos were shot in empty places, like graveyards and abandoned houses and her work does seem to be slightly autobiographical since she is her own subject in many of the shots she produced, I’m not sure they would carry such a depressing mood for me were she still around. Her technical ability is undeniable and her shots are well composed. She wouldn’t have had access to the digital equipment of today so her shots would have been much harder to capture and required a great deal of time and care. I have to say, I do admire her work and have found reflections of her influence in my own work. Michael Wesely’s work shows pure dedication to his vision. He used long exposures (sometimes of up to 3 years) to document urban development, this is called Bulb photography, in which the camera’s shutter remains open for as long as the shutter release button is depressed, allowing for longer exposure times than the camera would usually offer. His technique consisted of a self-built pinhole camera, a special bulb he used specifically, small apertures and the use of filters, he was able to significantly reduce the amount of light reaching the cameras sensor, thus creating the correct exposure for such a long time. Interestingly he claims that his technique could reach even further, and allow him to shoot for up to forty years in a single exposure. His photographs represent change, the passage of time and the effects of these things on the environment around us. His technique is interesting and certainly portrays how far photographical technologies have come and the potential for cameras of the furture. I find his images almost ghostly and devoid of human emotions, the emphasis is on the landscape and not the people that live in these urban environments. I imagine a post apocalyptic world when I view these photos, where the buildings are all that remain and people have long gone.

Hiroshi Sugimoto, heavily influenced by dadism and surrealism produced a series called Theatres, in which he would use long exposures to capture a whole film on the cinema screen from beginning to end. The result showed the screens gleaming white and the theatres empty.

Whilst his photos in his theatre series hold some eery otherworldliness to them, I have to say I am not overly influenced by his work. I understand his concept and can appreciate the message behind it, but it would not inspire me to follow suit and experiment.

“My dream was to capture 170,000 photographs on a single frame of film. The image I had inside my brain was of a gleaming white screen inside a dark movie theater. The light created by an excess of 170,000 exposures would be the embodiment or manifestation of something awe-inspiring and divine.”

The shots taken outside in the open, where you can see the passage of movements of the stars across the sky, hold more impact for me, there is a sense of time to these photographs that does not need explaining.

He does, however photograph some beautiful architecture in these cinema theatres which are well composed around the white screen which he usually shoots directly in the middle of the shot. The leading lines of the architecture within the cinemas bring your eye directly to the screen as if you are drawn into it. The effects you can create through long exposure shots can be rather beautiful and opens up another way for photographers to express themselves through their images, this example of photography by Darren Moore is a good example of what can be achieved: 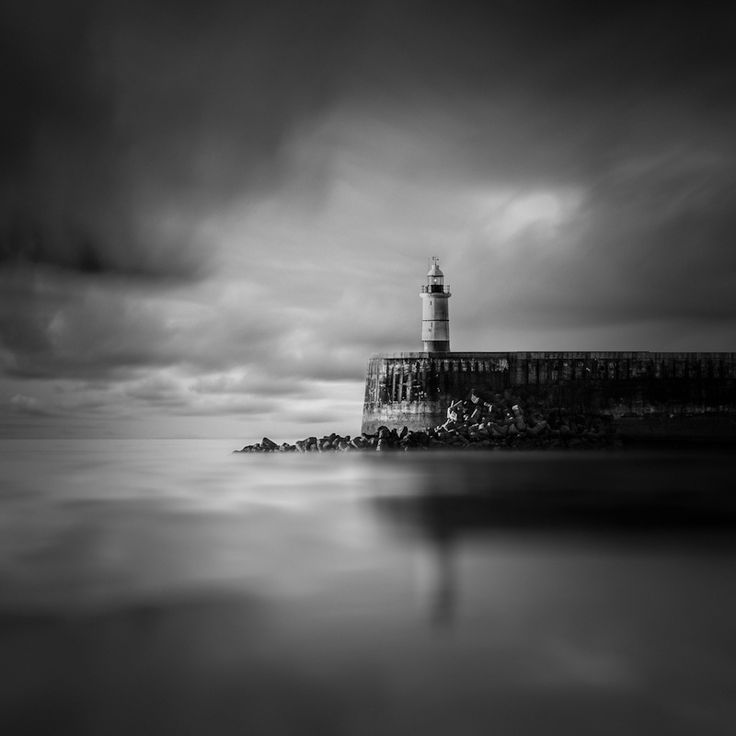 Moving objects like cars at night can create interesting light trails as they travel along the road. The sky & sea and other bodies of water become smooth, calm and blanket like. Taking a long exposure shot of the night sky will produce light trails of the stars. People become unidentifiable blurs (as in many of Francesca Woodman’s shots). It can create a whole new feeling a meaning to what would be perceived quite differently, had the scene been shot in 1/1000th of a second.

These were shot using a Nikon D750 with a 70mm-300mm zoom lens attached. I chose an overcast, foggy day and attached an ND10 filter to the end in order to obtain the correct exposure. I had to manually focus due to the neutral density filter being attached, I did this once the filter was screwed on so as to not disturb the camera once it was focused.

I used a tripod and a remote shutter release as I was the subject of the person shots. In order to gain the shots I used longer exposure times of 2-3 seconds, this gave me enough time to present movement in my photos whilst maintaining form to the subject. I experimented with moving by body at different speeds and in different ways. I also changed the focal length to vary the perspectives.